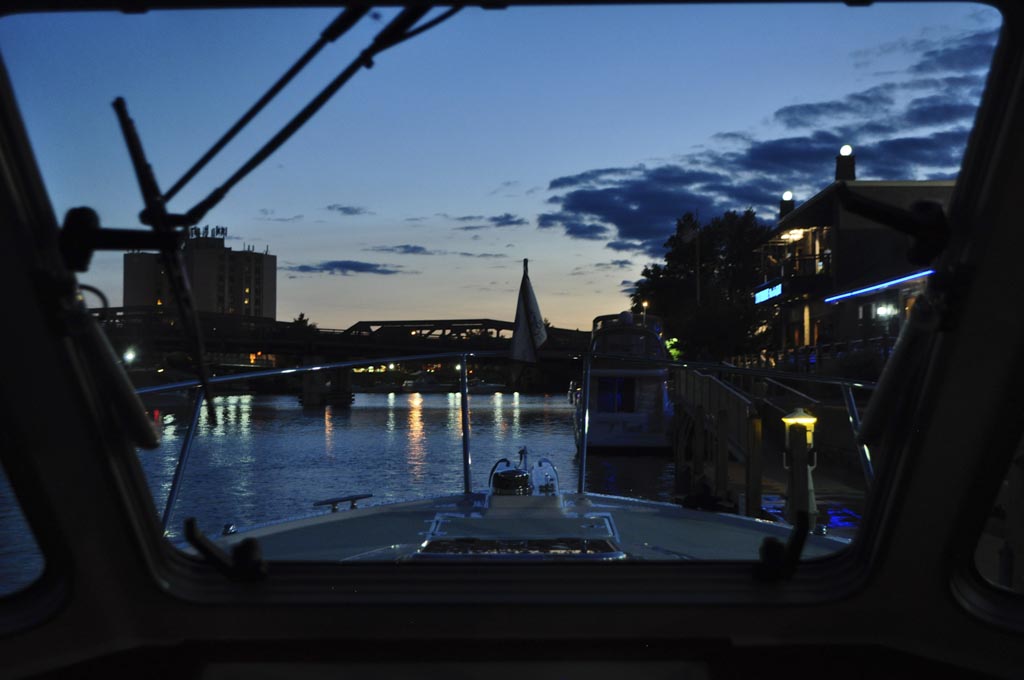 What can I say? Sometimes there is not a lot to post. We spent yesterday doing a quick cleanup of the boat, and then walked around town before heading back to the boat prior to dinner later that afternoon. North Tonawanda and Tonawanda are nice areas, but they do not have the "nautical" clientele in mind when it comes to shopping. If you want a vape shop or tattoos, plenty of choices. Otherwise its a town suited for those whose live here and need basic sundries.

Nonetheless, we enjoyed hanging along the river and just watching what happened throughout the day. Got a really good downpour late in the afternoon, then headed up early evening to the "Dockside Inn". Had some really good Clam Chowder here – some if the best I can recall (thinking of Bill), and enjoyed some ribs for the entree.


Sunday morning we headed out early to try to take advantage of the 1-3 footers forecasted on Erie. Hmm…. We planned to go through the last lock – Black Rock Channel and get on our way, but guess what – the lock does not open till 11:00 am on weekends, Seriously…11:00 am for recreational boaters on a weekend?! So we waited till 11:00 at the lock, locked through, then waited for a swing bridge to open, then waited for some skulling boats to clear then waited for a couple in a ~19 footer to idle along the canal in a lazy S pattern, as MnM, a trawler from Florida in front of us, and another trawler on our stern practiced shifting into neutral multiple times while the people in the 19 footer decided what they wanted to see next (never looking behind them, of course) before we could finally get out into the east end of Lake Erie.

Miss Erie of course, having her typical sense of humor, welcomed us with 4 – 6 on the starboard bow, but we proceeded southwest at around 18.5 knots. The boat got a good washing down as the spray was on our bow, and we proceeded to head across the lake to Dunkirk. Our original plans were Presque Isle, but we got tired of the waves and decided it was too nice of the day to spend another 2 – 3 hours continuing even though the lake was settling down a bit, we were tired of it. As such we stopped at Dunkirk. Filled up, pumped out at Chadwick Marina ($2.99 diesel and Boat US slip discounts), and had a very nice afternoon here. Dunkirk is a very nice stop as recommended by Jim. But on a cool note: we were in the Niagara River early today, and I turned the right way to avoid the falls.

While en-route to Dunkirk, we listened to a "Phan-Phan" man overboard event between Sturgeon point and Buffalo which, in reality, was a situation where they were having an open swim event, the spotting boat for one person had to go in for fuel and then could not find the person they were spotting. Why they were having a swim in 4-6 is beyond me but…. I'll say no more. Good news is that a charter fishing boat located the swimmer, and all ended well. We were too far west to be able to assist, but of course would have had we been closer. It was interesting to listen to to the Coast Guard correspondence and the communications between all the boats that went to work to try to locate the swimmer. Melodie and I were really happy when we heard of their locating him and that he was in good condition – probably just continuing the swim without realizing he was actually the subject of a search and rescue.

So…. tomorrow the lake is supposed to be flat, and as such we are planning to get an early start and head to Vermillion. Along the way the total solar eclipse should occur, so if all goes to plan we are going to shut MnM down in Erie during the event. Looking forward to that!

All the best to everyone following us. We enjoy the feedback, and look forward to seeing you soon.